The Adventures Of recycled robots

This is the story of how a bunch of tin cans and discarded items ended up in as a public art project in Downtown Vallejo for one year. 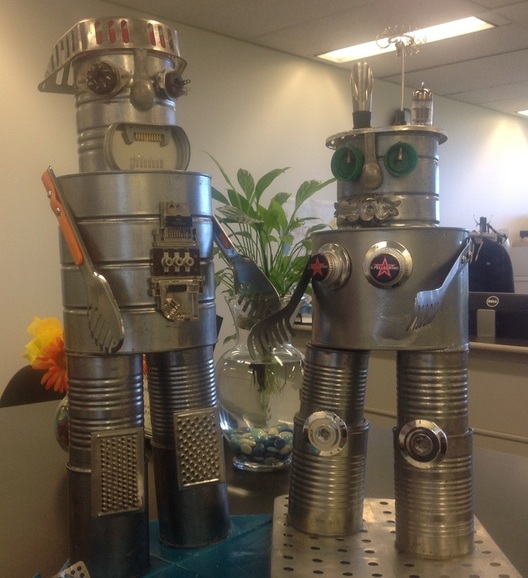 Oh, 6-year-old Annika Hellevik figured out how to accessorize her self-described robot with a skirt. But, just like other kids in Arts Benicia’s EcoArt Camp, the precocious child gave her metal man super powers.
And the super power was ...?
“I have to remember that because I did that a week ago,” Annika mused.
Pause. Light bulb over her head.
“The powers were transforming into animals, flying, singing and a fashion sense,” Annika smiled, admitting to liking this whole robot-making thing “because they move all by themselves and they can do things for you. Sometimes they make weird noises.”
Tobin, an artist who never worked with kids, can’t help but laugh.
“Oh my gosh. What I love are the things they come up with,” said Tobin, expecting to return next summer with the blessings of Arts Benicia youth program director Judi Morales Gibson in the last of the four-week program at Matthew Turner Elementary.
“We were looking for working artists that could teach to children. Artists that do their own thing, with their own style and technique,” Morales Gibson said. “I found that teaching that way is much more fun for the kids rather than having a set curriculum. It’s a much more expressive way for the kids to work with materials.”
Take those ever-popular robots. “They are similar but each one has its own personality and that’s what we wanted,” Morales Gibson said. “We wanted kids to express themselves and learn from a working artist. Sherry is bubbly and fun and these guys bonded the first day. It worked out.” Supported by the Benicia Unified School District with funding from the Benicia Community Sustainability Commission, the EcoArt Camp ended its second year Friday after a successful 2014 pilot program.
It wasn’t easy working out the kinks in teaching the young ones, Tobin said. “There was a bit of a learning curve for me,” she said. “Each day I learned something knew, would go home and build on that and come back and make it more interesting for the kids.”
Tobin utilized various items during the camp, making pets, the robots, and “all kinds of things” out of recycled materials, “teaching kids about reuse and re-thinking how to use things.” The robots, appraised Tobin, “Are cool looking. They’re great because they can do anything for you. They have super powers. But I don’t want them to take over our jobs.”
The key to working with the 6- to 8 year olds, said Tobin, “is having extra things to do. It’s a long day for some of them. So you keep trying to come up with fresh things. You keep mixing it up.” It was interesting, Tobin continued, that most of the kids had minimal super powers for their robots early in the process. “As the week progressed and we added more things on the robots, they got more super powers,” Tobin said. During the EcoCamp, kids also learned about bees and what they mean to the environment, creating useful items out of recycled fabrics, and assemblage and collage using recycled materials.
The robots will not just sit in a closet somewhere. At least not at young Annika’s home. “Well, I think I’m going to play with it and make a little house for it out of my items,” she explained.
The Adventures of Recycled Robots with the families of Vallejo Charter School
Having such a good experience teaching kids to create recycled robots, Sherry decided to create a Downtown Art Window with children and families of Vallejo Charter School. Pictured below are some of the recycled robots created at the Coal Shed on Mare Island.

The recycled robots created with the families of Vallejo Charter School were installed in a downtown Vallejo art window in October 2015. The robots are at 418 Georgia St and and can be seen by pedestrians and cars driving by. 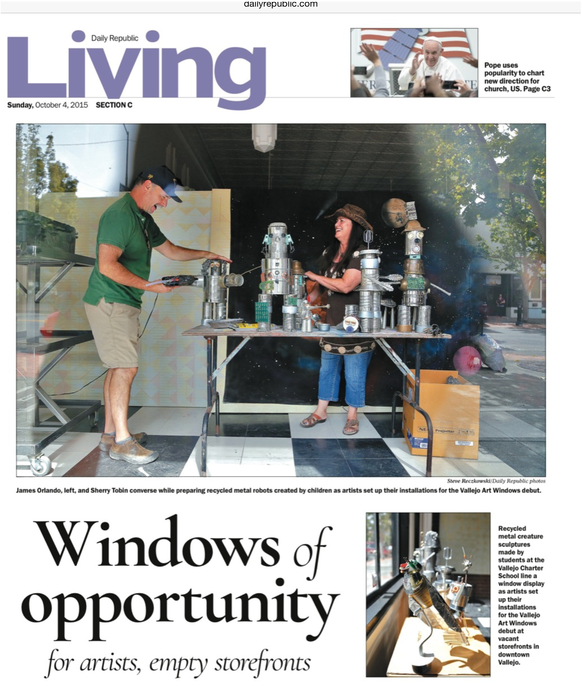